by Sarah A Keith 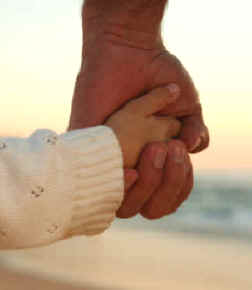 Though you stumble, you will not fall, for the LORD upholds you with his hand (Psalm 37:24).

Imagine this scenario, or maybe you've experienced it firsthand: a big strong daddy walking next to his little toddler. As they walk, the father reaches out his hand, and the child slips her hand into his—such a precious sight. Then suddenly the child stumbles, but she doesn't fall. Why? Because the father was holding on to her! In a nanosecond the father clenched his daughter's hand even tighter and rescued her, lifting her up out of harm's way!

Over the last year I've experienced this kind of Father-God rescue. You see in October of 2013, my husband, Bob, fell and sustained a traumatic brain injury. The doctors told us that if Bob survived, he might never talk or understand anything ever again. And for those who know Bob Keith, this was unimaginable!

Today's Bible verse: "Though you stumble, you will not fall . . ." gave me no comfort. It seemed to mock our tragedy. My husband did fall and was seriously hurt. How could I square this with my faith? Why didn't God hold him up? Where were those protective angels? Then, twelve days after Bob's accident, my precious mother died. My world crumbled—I descended into the deepest pit of grief, despair, and doubts about my faith. Every Bible lesson and devotional I had ever written seemed like a lie. I didn't think I would survive. How could I go on? I uttered simple prayers, "Jesus, Jesus, Jesus." I cried out to God for help. I begged God for a miracle. My soul screamed out, "Where are you God? Why have you done this to us?!" Miraculously, an answer came. God spoke to my spirit, saying, "Remember Lazarus?" (Jesus allowed Lazarus to die, so that when he raised Lazarus to life, God would be glorified and others would believe, John 11:4, 14.) "Yes, Lord, I remember Lazarus. I remember the doubts of his sisters, Mary and Martha, and their questions, but also your answer!"

I began praying that God would raise Bob up like he did Lazarus, so that God would be glorified and others might believe! Over the next six months of hospitalization, with several more life-threatening events along the way, God reminded me of Lazarus. One of the get-well cards we received was from one of the children I had taught the previous year. And do you know what he wrote? "Remember Lazarus. God raised him up"! The story of Lazarus also randomly showed up in articles I read, or comments from others. In addition, total strangers would sometimes poke their heads into the hospital room and say, "Don't worry, God will heal him." (I think some of them may have been angels.)

As I write this it has been just over a year since Bob's injury. God, in his mercy, is slowly restoring him—strengthening him physically and giving him the ability to talk and understand. Do I still have doubts? Well, yes, but I am further along in my faith then I was before. God is faithful and continues to hold on to our family as we walk this path, providing his strength, hope, and peace to sustain us.

Now imagine this scenario: over 2000 years ago, an infant boy with chubby fist, wrapped his fingers around his mother's finger. Yet this child is like no other—he holds the universe in his hands. And those same hands were later stretched out on a cross to rescue us for eternity!

"For to us a child is born,
to us a son is given,
and the government will be on his shoulders.
And he will be called
Wonderful Counselor,
Mighty God,
Everlasting Father,
Prince of Peace" (Isaiah 9:6).

2018 Update: Bob continues to improve, despite the doctors dire predictions. He understands so much more now and can respond to questions with much more clarity of speech. Your prayers are much appreciated!