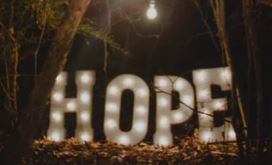 Jesus is dead. The disciples are hiding—afraid and without hope. The women disciples muster their courage to prepare the dead body, but when they arrive at the tomb, they discover angels guarding it! They receive the news: "He is risen!" They undoubtedly experience confusion, unbelief, acceptance, and then joy!

They then ran to tell the men, but the men discount their testimony—it sounded like nonsense to them, except for Peter. Maybe? Could it be? He then runs to the tomb to see for himself, but sees nothing, and walks away wondering.

That same day two of Jesus' followers, Cleopas and another, were on their way to Emmaus. (This is such an amusing story. Jesus toys with them—first by eavesdropping, and then by flat out butting into their conversation.)

"What are you talking about?" Jesus inquires.

"Are you the only one who doesn't know what's going on around here?"

"Like what?" (Do tell. . . Jesus certainly knew what they would say. Maybe he wanted them to confess it with their mouths.)

They continued (more like, "Are you kidding me?"), "We're talking about Jesus of Nazareth! He was a prophet; he spoke powerfully and did great things before God and all the people. The chief priests and our rulers handed him over to be sentenced to death, and they crucified him; but we had hoped that he was the one who was going to redeem Israel" Luke 24:19-21 (NIV).

We had hoped. Do you hear their despair? (Their lives were shattered, or so they thought.) Then the charade was up. (Why they didn't recognize Jesus right away is unclear. Were they so downcast that they couldn't look up? Were their eyes full of tears? Were they so focused on their circumstances that they couldn't see Jesus? Or was Jesus miraculously keeping his identity from them for a special purpose, maybe to be recorded for the benefit of those yet to believe?)

"Jesus said to them, 'How foolish you are, and how slow of heart to believe all that the prophets have spoken! Did not the Christ have to suffer these things and then enter his glory?' And beginning with Moses and all the Prophets, he explained to them what was said in all the Scriptures concerning himself" Luke 24:25-27 (NIV).

How many times have we whispered in our souls, we had hoped. . . .

I had hoped to be healed.

I had hoped to marry.

I had hoped to have children.

I had hoped for children who followed the Lord.

I had hoped—fill in the blank—because our hoped-for lists can be endless!

The disciples' prayers were shortsighted, because if God had answered their prayers according to their plans—for Messiah to reign as King and defeat their earthly enemies—Jesus wouldn't have gone to the cross. The fact is, Jesus had answered their hoped-for request. He had redeemed Israel, indeed all of humanity! He had done immeasurably more than all they (or we) could have asked or imagined (Eph. 3:20)! But they were slow of heart to understand, (meaning dull-minded in the Greek). They needed God's perspective, and so do we!

How do we make sense of the situations where it seems that God withholds our hoped-for things from us? Is he capricious in his decision-making or is there a greater purpose? Are we like the disciples—so fixated on our circumstances that we too can't see Jesus in our midst, working out his perfect plan? Do we fully appreciate that God is transforming us into the image of his Son (2 Co. 3:18)?

The Scriptures say, "Delight yourself in the LORD and he will give you the desires of your heart. Commit your way to the LORD; trust in him and he will do this" (Ps. 37:4-5). This verse seems to say our hoped-for requests will be granted as long as we fully commit our ways to God. Yet, if that's true, then we've fashioned an idol, a Magic Genie of sorts, who is at our beckon call. No, this verse speaks of God working in our lives, and as we mature in him, God places his desires in us so that we want to obey him!

God is building a temple, not made by human hands, where his Spirit will live (Eph. 2:21, 2 Co. 5:1). The stones of this marvelous temple are being shaped and honed by the Master. What Christ-like character does God want to fashion in our souls? Chip, chip. What behavioral flaw does he want to smooth over? Chip, chip, chip. What sin does he want to eradicate? Chip, chip, chip, chip. This kingdom principle should not be overlooked in situations where our hoped-fors haven't been granted. God has an eternal perspective and purpose. He will not settle for a people who haven't been trained according to his will. This is foundational for understanding the disappointments in our lives and for making sense of them.

Jesus told Cleopas and his friend, had they believed the Scriptures, they would have known these things, which is also true for us. The Scriptures tell us that God is love; he has a plan for our lives (1 Jn. 4:8, Eph. 1:11). Even though we don't always understand what God is doing, we don't need to walk away wondering, as Peter did, whether God is there, and questioning if he cares or if he's abandoned us?

Romans 8:32-39 says, ". . . in all things God works for the good of those who love him, who have been called according to his purpose . . . neither death nor life, neither angels nor demons, neither the present nor the future, nor any powers, neither height nor depth, nor anything else in all creation, will be able to separate us from the love of God that is in Christ Jesus our Lord" (NIV).

Since God loves us that much, we can be sure that when he's completed the character traits he desires in us, we like the women disciples, will move from confusion and unbelief, to acceptance and joy. We will understand that God had our best interest at heart all along. And we will know, like Cleopas and his friend discovered, that Jesus has in fact answered our hoped-fors above all we could ask or imagine!

Prayer
Father God, help me not to be dull-minded to your working in my life. Help me to trust in you. Help me to remember that you are good, and that your very nature is love. Help me to put my hope in you. Amen.