from the book Bible Games Explosion. 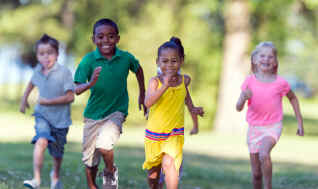 Bible Bumpers can be played indoors or out and used with a variety of Bible stories.

Set up
You will need a chair or place marker (such as a Poly-spot) for every player, minus one. Arrange the chairs or markers in a large circle. Use your current Bible story to determine the words—a person, place, or thing—that will be used during the game. Write each word on a card and give one card to each player. For example, possible words to use from the Parable of the Good Samaritan, from Luke 10:30-37, would be: man, Jericho, Jerusalem, robbers, clothes, priest, road, Levite, Samaritan, donkey, innkeeper, etc. There should be at least two cards with the same word written on them. It's ok to have more than two cards for each word.

How To Play
Players begin by sitting in the chairs or standing on their place markers. The player without a chair or place marker stands at the center of the playing area. Teacher reads the Bible story. When players hear their word called, teacher pauses, at which time players race to switch places with another player who has the same word. At the same time the player standing in the center must run to "bump" one of the players who are switching places from his or her empty spot by sitting in the empty chair or standing on the empty place marker. The player who doesn't get to the chair or place marker is "bumped" and goes to the center in the next round of play. Play continues as such until the Bible story is completed.