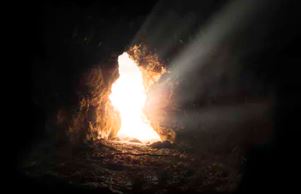 Set Up
Large playing area where you can mark off 8-10 foot circles, "tombs," for each team. (If you're playing indoors, you can use masking tape. If you're outdoors, use a rope, hose, or banner flags.) Place two cones a few feet apart on the edge of the circles to designate the entrance to the tomb.

How To Play
Evenly divide players into teams (preferably 8-10 per team). Players from each team must lie down in their tombs. While the players are lying down, "playing dead," read the Scripture verses above. Designate one player from each team to be the first to go. At the GO, the teacher says, "Arise!", whereupon the designated player from each team stands up, runs out through their tomb entrance, runs completely around their tomb, reenters the tomb through the entry way, tags another player on their team and says, "Arise." First players then sit down on the outside edge of their tombs, and the tagged players proceed as before. Play continues like this until all the players have been tagged and have run completely around their tomb. When the last player from each team has run around the tomb and sa down, the entire team must yell, "EMPTY TOMB!"

How To Win
The first team to empty their tomb and scream, "Empty Tomb," wins!

After the Game
When all the players are sitting around their "tombs," read the Resurrection story from a child-friendly Bible, found in Matthew 27:41- Matthew 28:10.

Lead players in prayer. (Suggested prayer: "Dear Jesus, thank you for dying on the cross for my sins and rising from the dead to give me eternal life! Help me to follow you and to know you more. Help me to love you. Amen.")

Empty Tomb is one of the Bible games found in His Name Shall Be Called . . .

Your donation to the site, even the smallest amount, will help us distribute our children's ministry resources to churches across the world.