I Can, Through Christ 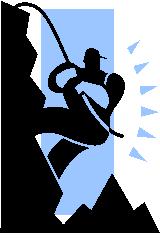 I can do everything through him who gives me strength (Philippians 4:13).

A few years ago a good friend and I visited her son at college. The first day there, we biked twenty miles through a state preserve. We saw some large alligators, petted wild horses, and saw a beautiful deer, which was standing just a few feet off the bike trail! It was exhilarating, a God-blessed day!

The second day we went with my friend's son, and one of his friends, to climb a manmade rock-climbing wall. My friend's son climbed first. He scurried up the wall without a care. The son's friend, who was terribly afraid of heights, went next. She climbed slowly and methodically, wanting to stop and turn back several times. But we called out from below, "You can do it. Just one more step, you're almost there!"

Shaking and trembling, she made it to the top; and then carefully repelled down the wall. We were so proud of her. Even though she was weak-kneed, she was also proud of herself! Then it was my turn. I said, "I'll give it a try, but don't expect me to go more than about eight feet!" I started up. "Hey this is easy." I thought. But about twelve feet up I froze. I couldn't go further! Even though I was safely harnessed in, with my friends holding the rope and cheering me on, I couldn't budge another step up. Protesting my pleas to stop, they allowed me to come down. I was proud of myself for having gone as far as I had, yet at the same time wished I had overcome my fear. Then it was my friend's turn to climb. She too was fearful, but made it to the top, and repelled down like a pro!

Later that day, as we drove home, we talked about our climb. I told her that I wasn't as afraid as I thought I would be, but that I felt out of control, so that's why I stopped. Then she said, "It was preordained that you wouldn't go all the way up."

"You pre-ordained the outcome. You determined before you started, that you wouldn't go to the top. In fact, you even pre-determined where you would stop."

(I had made it a bit further than eight feet, but I had to admit she was right, which made me think, how might I do this in other areas of my life?)

The Apostle Paul, in his letter to the Philippians, told them how much he appreciated their support, because when he went out from Macedonia, the Philippian church was the only church that supported him. He said, "I rejoice greatly in the Lord that at last you have renewed your concern for me. . . . I am not saying this because I am in need, for I have learned to be content whatever the circumstances. I know what it is to be in need, and I know what it is to have plenty. I have learned the secret of being content in any and every situation, whether well fed or hungry, whether living in plenty or in want. I can do everything through him who gives me strength" (Philippians 4:10-13).

To be content is to be at ease, peaceful, or happy. When we're content, we can't be fearful! Paul had learned to be content through the circumstances in his life. God had taught Paul to trust him. Paul knew God cheered him on, and provided for every situation. He understood this, believed it, and spoke God's power into his life!

Before my rock-climbing adventure, I wouldn't have applied Philippians 4:13 to that event. That is until my friend made that profound statement, "You preordained the outcome."

I came to understand that we can limit ourselves with our words and thoughts. But as children of God, we need to speak his power into our lives. The next time I face an impossible "wall to climb," rather than make a self-fulfilling prophecy of failure, I want my prayer to be, I can do everything through him who gives me strength.

Prayer: "Dear God, help me trust you in any and every situation of my life. May the words of my mouth, the meditations of my heart, and the actions of my life, be pleasing in your sight, O Lord my Rock and my Redeemer."


You can make a difference!
Your donation to the site helps us distribute our children's ministry resources to churches across the world.