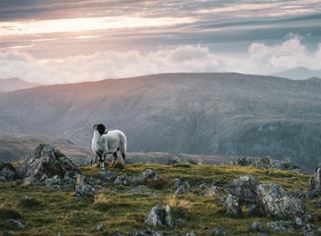 What is this kingdom-like characteristic that Jesus wants us to emulate? Primarily, I believe it is dependence. The human baby is among the neediest of all creatures; when children are born, they cannot do anything for themselves. Even though they are able to do more for themselves as they grow older, children remain highly dependent on their parents, teachers, and caregivers to provide for their physical needs, and to teach and nurture them well into their teen years and sometimes even into adulthood, (but that's another lesson).

We live in a culture where independence and "doing our own thing" is valued. But God wants his children to fully rely on him, no matter our age. It takes humility to say, "God, I need help; I can't do this or that on my own." God's Word says, "Trust in the LORD with all your heart and lean not on your own understanding; in all your ways acknowledge him, and he will make your paths straight" (Proverbs 3:5-6).

After Jesus told his disciples, they must become like children to enter the kingdom, he then issued a stern warning in Matthew 18:6-7, "But if anyone causes one of these little ones who believe in me to sin, it would be better for him to have a large millstone hung around his neck and to be drowned in the depths of the sea. Woe to the world because of the things that cause people to sin!"

Typically, we are not use to hearing such harsh words coming from the lips of Jesus. Moreover, we may have the idea that the God of the Older Testament is defined as one of anger and judgment, while the God of the New Testament is one of grace, love, and mercy. But this is false. Jesus is the same yesterday, today, and forever (Hebrews 13:8).

Following Jesus' warning concerning how to treat children, the conversation changes to a parable and may seem disconnected.

"What do you think? If a man owns a hundred sheep, and one of them wanders away, will he not leave the ninety-nine on the hills and go to look for the one that wandered off? And if he finds it, I tell you the truth, he is happier about that one sheep than about the ninety-nine that did not wander off. In the same way your Father in heaven is not willing that any of these little ones should be lost" (Matthew 18:12-14).

I used to think that the "one sheep" Jesus spoke about had to do with someone who is unsaved, and not part of God's kingdom. Yet, Jesus is speaking about sheep and not goats! In other words, that one sheep is already part of the flock, which means Jesus is speaking about someone who has wandered from the faith. And what does Jesus say happened? The shepherd went and found the sheep and brought it back into the fold!

I believe Jesus had Ezekiel 34:1-16 in mind when speaking about the Lost Sheep in today's Bible verse. God told Ezekiel to prophesy against the shepherds of Israel, referring to the leadership, because they cared only for themselves and not for the flock, that is, God's people. He said, "'. . . Woe to the shepherds of Israel who only take care of themselves . . . You eat the curds, clothe yourselves with the wool and slaughter the choice animals, but you do not take care of the flock . . . You have not brought back the strays or searched for the lost. You have ruled them harshly and brutally. So they were scattered because there was no shepherd. . . and no one searched or looked for them' . . . For this is what the Sovereign LORD says: 'I myself will search for my sheep and look after them . . . I will rescue them . . . I will search for the lost and bring back the strays . . . '"

In the Ezekiel passage, God acknowledges the failure of the leadership to care for his sheep, which resulted in the people scattering, and becoming strays. But God promised to someday provide a shepherd to lead his children back into the fold. In the Matthew passage, following Jesus' warning of the consequences of causing "little ones" to sin, he says, "What do you think? . . . will the shepherd not leave the ninety-nine sheep on the hills and go to look for the one that wandered off?" The answer is, of course he will; the shepherd will go and find the lost sheep! God lives up to his promises;  He became the Shepherd who rescued, and continues to rescue, his people. Is this not what Jesus, our Good Shepherd, has done for us?

Today's verses encourage me regarding the spiritual welfare of two of my adult children, who, from my perspective, are not living for the Lord. Their relationships with God are a source of deep concern. I trust this study will comfort those who are concerned for their lost or stray children, and will give them hope that our Good Shepherd will continue searching for them too.

What five things do we learn from today's devotional?

1. God wants his children to depend on him. We are to trust God with all our heart, soul, and mind.

2. Our "shepherding" role as parents, teachers and pastors, is extremely important. How we treat our "flock" matters deeply to the Father.

3. Causing others to sin is a really big deal to God. Ezekiel and Jesus both pronounced judgment, saying "woe," an expression of grief, to those who mistreat God's children and who cause their flock to stray from God.

4. The shepherds in the Ezekiel passage cared only for themselves, which made the flock scatter, but God promised a Shepherd who will bring them back. Contrast this with the Matthew passage, which tells us that our Father is like the happy shepherd, who is not willing that any of these "little ones" should be lost. So what does he do? He goes and gets them!

5. As parents, teachers, and pastors, we do our best to bring our children up in the knowledge and love of God. But even when we fail (and we most certainly will from time to time), these passages offer hope that Jesus, our Good Shepherd, will seek, find, and rescue our lost and stray sheep—those one-percenters!

Prayer
Dear Lord, thank you for seeking me when I was lost. Help me to shepherd the flock under my care. Thank you for the promise, that you are not willing that any of these little ones should perish. Amen.