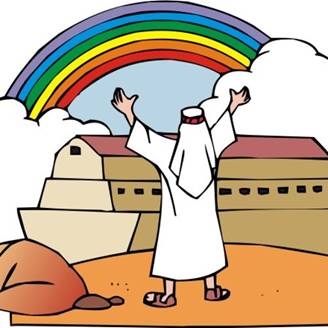 Most people have heard the story of Noah's Ark*. Our lesson today will be based on this story, but its focus will be on Noah's trust in God, his obedience to God and a reminder of God's promise to us.

"Noah was a godly man. He was without blame among the people of his time. He walked with God. Noah had three sons. Their names were Shem, Ham and Japheth. The earth was very sinful in God's eyes. It was full of mean and harmful acts. God saw how sinful the earth had become. All of the people on earth were leading very sinful lives. So God said to Noah, 'I am going to put an end to all people. They have filled the earth with their harmful acts. So make yourself an ark from cypress wood. Make rooms in it. Cover it with tar inside and out.'" (New International Readers Bible)

The ark that Noah built was not your average-sized boat. It was one and a half times the length of a football field, and four stories high. It was as large as some of the ships that sail the oceans today. It was built exactly the way God told Noah to build it.

But greater than the ark (or boat) was Noah's obedience to God. Think of what it must have been like for Noah and his family. They were building a huge boat in an area that was not near a lake or the ocean. It was too large for anyone to move it to a lake or the ocean. The bible does not say this, but if there were other people in Noah's neighborhood, they were probably wondering why Noah was building an ark.

Did Noah care what people thought? I'm sure he probably felt just like you or I would if people were laughing at us and trying to make us feel foolish He must have had many days when he asked God if it was really necessary for him to build this boat.

But Noah loved God, so he remained obedient. Noah did exactly what God had commanded Him to do."

At this point stop the lesson. We are going to draw a big picture of the ark with a ramp, and a rainbow. (Make a very large ark and rainbow. Have the children help. The one we did was almost 4 feet long and 3 feet high. Rainbow was drawn on a separate piece of paper and cut out after coloring.)

Write down Ark facts to hang next to the ark:

It was designed by God.
Built by Noah and possibly his sons.
He built it exactly as God instructed.
It was made of Gopher wood.
Coated with pitch (tar) inside and out.
Length was 450 feet. 1 1/2 times the size of a football field.
Width was 75 feet.
Height was 45 feet.
Approx. 4 stories high.
It was shaped like a rectangular box.
It had one door.
It had one window.
The sides were open a foot and a half from the top.
It had lower middle and upper decks.
There was no way to steer it.
Noah, his family and a pair of every animal stayed in the ark for more than a year, just floating around.

God said " When the rainbow appears in the clouds, I will see it. I will remember that my covenant will last forever. It is a covenant between me and every kind of living thing on earth" Genesis 9:16.

(Smaller children will cut out animal pictures from magazines. Hopefully find two of each kind. After the ark is drawn, animals can be glued on during the next lesson.)

Continue with lesson on the following Sunday.

"I am about to cover the earth with a flood that will destroy every living thing. But I solemnly swear to keep you safe in the boat, with your wife and your sons and their wives. Bring a pair of every kind of animal, a male and a female into the boat with you.

So Noah did everything exactly as God commanded him. Noah trusted God.

Seven days later it began to rain and it continued for 40 days and 40 nights. The water covered the highest mountains but Noah and his family along with all the animals remained safe, just like God promised they would. They stayed in the boat for almost a year.

"I have put my rainbow in the clouds. It will be the sign of the covenant (promise) between me and the earth. Sometimes when I bring clouds over the earth a rainbow will appear in them. Then I will remember my covenant between me and you and every kind of living thing. The waters will never become a flood to destroy all life again. When the rainbow appears in the clouds I will see it. I will remember that my covenant will last forever." (Stop here)

Why did Noah build the ark? [He was obedient to God]
What is the sign that will remind us of His promise? [The Rainbow]
What is Gods promise to us? [Never to flood the earth to destroy all life again]

Find more lessons on The Great Promises of the Bible

Return to the Lessons and Sermons page.