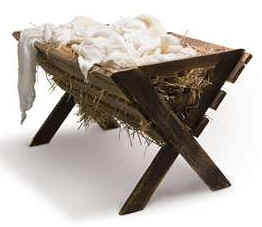 Preparation: I made a simple trough-like manger. The ends are from two pieces of 1" x 1" x 12". I made a lap joint for each so the pieces interlock to form an "X" 90 degrees to each other. Four slats join the two end pieces. I chose to use mortise and tenon joints so one sees a clean "X" when viewing from the ends.

Show the kids and the congregation the manger. Explain that the manger into which Jesus was laid was probably not like this, but was a hewn block of stone or slabs of stone next to the wall to make a trough. But, what I have here is what we often picture, so we will work with it for today.

Jesus was placed into a trough to remind us that God became a human. John says, "The Word (Jesus) became flesh." The fancy word for that is "incarnation." If you eat chili con carne it means you have chili with meat in it, not just beans and sauce. A carnivore eats meat. "Incarnation" means to take on flesh. Jesus did not give us a set of instructions on how to become like Him, but He became like us. He lived in the midst of the mess caused by our sins. He lived a perfect life so God could see us as perfect because of Him.

Something happens if we look again at this little manger. (Hold it so everyone can see the end directly. Turn the end so it appears as a cross.) Tell them Jesus came to die on the cross for our sins. The manger at Christmas reminds us this is not just a sweet story about a new baby, but it reminds us Jesus came to carry our sins on the cross. The manger helps us to see Good Friday in Christmas.

But, there is more. (Turn it so the end appears as an "X".) What does this look like? What letter of the alphabet? (Someone will likely say an "X".) Tell the kids and congregation it looks like an "X" to us, but in Greek it is a letter known as "chi." Tell them it has a "ch" sound and it is the first letter in the word "Christ." Some people do not like it if you write "Christmas" as "X-mas." They may think you are trying to take Christ out of Christmas. What they do not realize is that the "X" is a very old abbreviation for Christ that appears in some very early copies of the New Testament. "Christ" is not really Jesus' name, but His title. It means "The Anointed One." That normally means pouring oil over someone, often to make them a king. Jesus was anointed with the Holy Spirit. He is also the One who comes to rule for God. He came announcing the Kingdom of God was very near. Jesus is the King of Kings and Lord of Lords.

When we believe His promises our sins are forgiven and He comes to live in our hearts by His Holy Spirit. He rules in our hearts and changes our lives. Now we live in the midst of a world that wants nothing to do with Jesus, and does not want Him as its king. But, He will come again one day and will show everyone that He really is the king over all.

When you look at the manger, see in it a reminder that Jesus took on our flesh and died on the cross to redeem us. Also see in it that He is our king Who rules over us and will one day take us to be with Him forever in that kingdom.

Return to the Sermons' and Object Lessons' page.