Give Him the Name Jesus

"And you are to give him the name Jesus, because He will save His people from their sins" Matthew 1:21b.

I have recently been asked to read and comment on a book written by a friend expressing why he finds the content of the Christian faith beyond believable. As I wrote my response, I was prompted to recall that I too once found the truth claims of the Bible beyond belief. I would have made some of the same arguments that my friend did. I thank God that I still have some friends that do not yet believe for the challenge, candor, and honesty they bring to me about why I believe now, what I once could not believe. Christians have to admit that what we believe is pretty unbelievable . . . and yet we believe it . . . why?

One of the most compelling reasons for Christian faith for me is the issue of Old Testament prophecy and fulfillment. The late Dr. D. James Kennedy, founding pastor of Coral Ridge Presbyterian Church wrote a number of years ago in his book entitled, Why I Believe, that there are some 2000 specific prophecies in the Old Testament alone. These prophecies, written centuries before the events they described took place, declare with certainty events that would actually transpire, just as they said, should, it seems to me, compel our attention to respect the truth claims of Holy Scripture.

One such claim that struck me is the story of the coming of the Magi from the east. Matthew tells us of their journey, search, and arrival in chapter 2 of his Gospel. We tend to think of them as numbering three, but the text does not actually tell their number, only that they brought three gifts: gold, frankincense, and myrrh.

The prophet Isaiah, writing in the 8th century before Christ, makes many specific prophecies concerning the coming Deliverer of Israel. It is Isaiah who tells us that He shall be associated with a manger in chapter 1; He will be born of a virgin and called Immanuel, "God with us," in chapter 7; He will be divine and human in chapter 9; of the family of David in chapters 9 and 11; that He will rescue not only Israel, but people of all nations in chapters 11 and 55, 56, and 60; that His ministry would be characterized as by healing in chapter 35; that He will come to die as a sin offering for the sins of His people in chapter 53; and that He will be anointed by God himself in chapter 61. These are but a few of the prophecies made by just one prophet some 700 to 800 years before Christ was born. The New Testament writers meticulously record the fulfillment of these prophecies as evidence, leading them to put their trust in Jesus as their King, even though doing so could, [and did], put their lives at risk.

In chapter 60:6, Isaiah writes that the wealth of the Gentiles would be freely given as an act of worship and even specified what gifts Gentiles would give to the God of Israelnamely gold and frankincense! Further, Isaiah anticipates that the gifts of these Gentiles would be accepted by God as acts of legitimate worship. In verse 2, Isaiah also tells us that it would be kings who would bring these gifts to the Rescuer of Israel; hence we have our Christmas carol, We Three Kings!

As remarkable are the lengths to which God went to bring such a prophecy to pass; during the exile, God sent priests into exile, among them Ezekiel and Daniel, some 600 years before Christ. Daniel rose in the court of the King of Babylon and became chief of the Magi.

It would seem that he taught them the Bible so that they would look for the coming Rescuer of Israel when he would arise. Among the prophecies, he must have taught them is Numbers 24:17, that a star would rise out of Jacob, pronounced from the lips of Balaam, the most notorious false prophet in the Old Testament! It was because of this prophecy that the Magi followed the star which led them all the way from Persia to Jerusalem, to the very house where the child was, that they might worship Him and bring Him their gifts of gold, acknowledging Him as their King, frankincense acknowledging Yahweh as their God and seeking His priestly intercession on their behalf; and myrrh, not mentioned in Isaiahs prophecy, but anticipating Mark 15:23 and the myrrh that was offered to Jesus as He died on the Cross for their sins and ours. This child born in Bethlehem was to be called Jesus, for He would save His people from their sins.

Dear Lord, Thank You for the gift of faith that gives us eyes to see how You have fulfilled prophesies. As we celebrate Advent, help us experience anew the wonder of the child born in Bethlehem. Amen.

Teach children about the Names of Jesus. 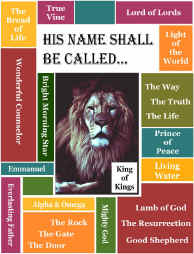