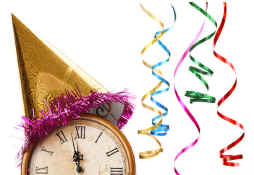 Did you see the invisible Christ on New Year's Eve? The entire world celebrated him, and yet I would venture to say that millions were unaware of his presence. Metaphorically speaking, the rocks* cried out proclaiming his presence!  Jesus showed himself across the world, on international news no less! From Australia to China, from Iraq to Europe, and into the Americas he was celebrated! Did you see him?

The New Year is designated "AD," an abbreviation for "Anno Domini," meaning in the year of the Lord. And do you know that the Christian era is the only system in everyday use in the Western World, and is predominant in commercial and scientific use in the rest of the world?

There is a move today to replace AD with CE, originally an abbreviation for "Christian Era," but now known as "Common Era," to make it religiously neutral.

However, whether we call it AD or CE, time is still marked by the life of Jesus Christ, the Word who became flesh. Jesus came to earth to sacrifice himself for our sins—to take the punishment we deserve for sinning against holy God. He then overcame humankind's greatest foe, "death," when he rose from the dead. And because of Jesus, God offers forgiveness of sins to those who follow him, and the promise of resurrection to eternal life with God: "But as many as received Him, to them He gave the right to become children of God, even to those who believe in His name" 1 John 1:12 (NAS).

Keep your eyes on Jesus in this Anno Domini; because he'll show up in unexpected ways!