Put on the full Armor of God 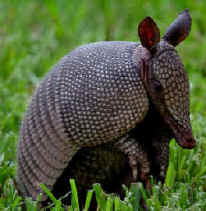 "For our fight is not against flesh and blood, but against authorities and powers, against the world-rulers of this dark night, against the spirits of evil in the heavens" Ephesians 6:12 (BBE).

When making a trip to Kansas recently my husband and I were amazed at how many dead armadillos we saw along the roadsides in Missouri and Kansas. We had seen armadillos when traveling in Florida, but hadn't realized that we would see them as we traveled west from Indiana.

I texted my son, Brian, about the dead creatures. He remarked that armadillos were just possums wearing armor, which sparked a thought about the Armor of God. (I love finding things in everyday life that speak of Bible truths.) I texted him back that somehow I thought these armadillos would become part of a devotion I would give soon.

In Ephesians 6, we are told about spiritual armor: the belt of truth, the breast plate of righteousness, the helmet of salvation, the gospel boots, the shield of faith, and the sword of the Spirit. Yet, all this gear is worthless if we fail to put it on to prepare for warfare. It is also worthless, if when we have it on, but we do nothing with it. That is, we do not engage in the battle, or we run from it. Yes, we may have our gear on, but in running away from the battle, we are apt to stumble and fall, succumbing to the enemy that could have been defeated had we stood strong and courageous by using all the protection God's armor provides.

Armadillos are slow moving, not quick to be out in front. They hide where they can't be seen. They run from most threats and stay to themselves or hang with others that share their weak attributes. Likewise, Christians sometimes can be slow, and keep to themselves. They often make bad decisions and eventually find they forgot to put on their armor when spiritual battles arise. They discover they are not prepared to fight, because they failed to use:

The Belt of Truth (which will protect them from the devil's schemes).

The Breast Plate of Righteousness is activated by relying on the Righteousness of CHRIST. The Battles are the LORD's! WE are HIS soldiers. HE leads the battles, protects us, and it is HE to which the victory is attributed.

The Helmet of Salvation, protects the Christian's thinking and life. When we die we go to be with JESUS when we have truly received salvation. What we think and understand is under that helmet's protection. But too many proclaim to be Christians and yet they do not understand what they believe, nor why they believe it!

The Gospel Boots help Christians step boldly into the world with no fear of being tripped up or fooled by the world's ideas of religion. The Gospel Boots allow us to step forward with confidence to share the good news with others, no matter where we go.

Although the Shield of Faith is something to carry -- it is more than that! The Bible says it protects from the fiery darts of the devil. You have to recognize those fiery darts and from whom they come; then you are able to know when to use the shield. We learn about Satan's trickery in the Bible!

The last armadillo we saw intact was laying in a surrendered position on the side of the road, appearing as if it gave up. Christians are often like that armadillo, life gets tough, and they aren't spiritually prepared for battle. They simply "give up" and surrender to the Enemy. It was sad seeing all the dead armadillos. It is even sadder to see Christians who are dead in Christ, not fighting their battles in the way GOD prepared for them, and just giving up and giving in to the Devil, leaving their carnage along the roadways of life. It is sad, so sad.

Don't be an armadillo Christian - put on your whole armor of GOD and USE IT! Fight the battles and become stronger and more courageous. Thank GOD for the provisions HE has given us in HIS Word.

Know it, Stow it, Show it! Life can be an exciting adventure when you use your full armor, daily!

Teach the Armor of God to children. 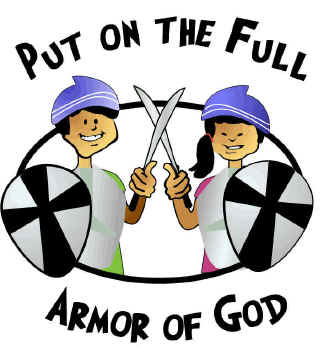 Return to the Devotionals for Older Teens & Adults.