Scoop from the Coop

Rooster on the Run

"In all these things we are more than conquerors through him who loved us" Romans 8:37 (ESV). 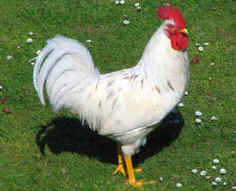 It's been a while since I've shared my scoop from the coop musings. During that "while" there have been many moments that I've thought about how the chickens' antics remind me of Christians in our own backyard, so to speak. Since I last shared, the little hens have watched the mature hens and have fallen right into the same roles, following the older hens' lead as to where to free range, where to lay eggs, and when it's time to coop up for the night. This reminds me of how new Christians oftentimes will sit back for a bit and watch what more mature Christians do within the church. Eventually they follow, join in, and soon have learned enough to be part of the group that is moving forward and getting things done--helping one another and working toward the same goal. The structured behavior is repeated over and over. That is what it takes to make the church successful, and what it takes for young chicks to learn!

Now my other scoop from the coop issue was with that rooster; the one I thought was a hen, and named her Dinah, only to discover, she was a HE - thus his name was changed to DINNER. I did not particularly want a rooster around, especially since the hens lay fine without a male around. The rooster would be more appreciated IF we wanted to raise our own chicks from the eggs. We don't. So basically, Dinner has a free ride and he throws in a little protection for the hens.

There is a twist to the story of Dinner. Although we have taken care of him just like his sisters; he was pampered with a warming light those cool spring nights and was sung to faithfully every night as the coop door was secured for their safety. But something didn't take with him; Dinner was different. It was not just that he was a young rooster, his personality changed. His demeanor went from being just one of the chickens, to an arrogant, brash, rude, and finally MEAN rooster! He started his shenanigans with the hens. (This is normal rooster behavior). However, at first, the older hens put him in his place. As I watched him showing off his rooster prowess with the girls and finding he could bully them into submission, I noticed him beginning to eye-ball ME!

At first, Dinner made aggressive advances toward another lady family member. We scolded him and backed him off if he started toward us. Yet, the ability to back him off didn't last long. Each day he became more aggressive toward me, his Crazy-Chicken-Lady-Mama! I admit, I became intimidated as he did his dance toward my feet - sliding sideways toward me with his wing extended to the ground, eye-balling me up and down, flipping is floppy rooster comb off his left eye, looking me in the eye and then down to my feet - up and down as he pranced closer and closer. He was planning to attack me - otherwise known as getting ready to FLOG the gal who fed him, tucked him in at night, and sang to him all those months!

Being a fairly peaceful Crazy-Chicken-Lady-Mama, I tried a somewhat passive way of training him to show who was boss. I filled a spray bottle with water, dialed up a steady forceful stream and would let him have it when he approached. He would back off and I could get by him. Soon I had to get a bigger bottle as it took more direct hits to manage him. It was like a carnival game of soak the chicken - only there was no prize for direct hits and the TARGET came after me whether I wanted to play or not!

The day finally came when Dinner busted through my defenses; jumping in the air, coming at me with his bright yellow chicken feet, and beating his wings near my face, he made contact and left a long scratch on my leg. My defense mechanisms instantaneously kicked in. No longer was there a gentle demeanor to this Crazy-Chicken-Lady-Mama! Before I even was fully aware of what I was doing, I had hauled off and kicked Mr. Dinner in the chest. He went flopping across the yard like a football from a bad punt in a bantam league football game! BUT - something happened! When we both regained some composure, Mr. Dinner backed up from me and I moved closer to him. The closer I got - the more he backed up from me! Finally, I was the alpha-chicken! (Winner, winner, chicken dinner!) For the first time, I was in control and the rooster was not! Frankly, I didn't know I had it in me - until he pressed it and made contact with me, until pain was inflicted, until I had had enough!

I did have a talk with myself over the fact that I, a grown woman of good stature, just beat off a 3-pound rooster. (Writing those words makes me sound horrible!) Then something reminded me that if a 6-ounce snake were after me no one would think badly of me chopping its head off. (And, yes, I have had to do that as well!) I had to forget those fluffy white feathers and his bright read cock's comb that hangs over his left eye like a French chapeau. This character was out to harm me, for no good reason. He was the one that ALWAYS started the skirmishes. I didn't look for a fight; he did!

Dinner still challenges me, but not every day. There are times I think I can read his mind. I see him rethink and back off. Other times he sneakily tries to move in where I won't see him and readies for one more shot at the attack. BUT, my guard is up now. I can usually ward him off and intimidate him - reminding him that I am BOSS-Chicken-Lady now!

SO where is the spiritual analogy in this confrontation with Mr. Dinner? It didn't take me long to see what GOD was showing me. My first breath of the Lord's Presence was when the Holy Spirit reminded me of Scripture to ease my mind about overpowering a 3-pound rooster. In Genesis 1:26, God's Word states that man was made to have dominion - rule over - the animals of this world. Animals are not to rule over man - or woman! From there I could assess this situation in farm life as a reminder to me of the Christian world. First, Dinner had been named Dinah, because she looked and acted like the others. In our churches Christians look and act alike for the most part. But people change, so did my chicken and so some Christians do as well. It became evident that Dinah was not a hen, but a rooster. His behavior was aggressive, sneaky, and obviously, he was out to "rule the roost." GOD began to show me a Christian analogy by observing this change.

You see, the Devil, Satan himself, will move into a church or Christian environment, not intimidated at all by those in the group - or by the one who is in charge of the congregation. At first he, too, will look and act like everyone else. Slowly little changes come about and the sneaky, aggressive behavior infiltrates so slowly many will not even realize it - until THEY are the one singled out and attacked.

The Bible describes such a situation as a "wolf in sheep's clothing." Mr. Dinner was representative of the devil in chicken feathers! His sneaky, aggressive attacks became clearer, yet I tried to continue to win him over by the wrong tactics. I needed to see clearly that he was up to no good. Satan is always up to no good and he is alive and living in most ministries!

Once I was hurt, my defenses came forward full speed. I took control and backed off the rooster, ruling over him because GOD gave me the authority to do so. We must look at Satan's attacks in the same way. He is always sneaky. He is always out to hurt us, even when we don't recognize it at first. Nevertheless, once GOD brings us to our senses, we must realize that we are to be in control; we are more than conquerors. JESUS will defeat every attempt that Satan uses to get the best of us - but only IF we allow GOD to take control in the powerful name of JESUS. He will bring us to victory over any enemy that tries to take a Christian down. We cannot do it in our own power, but rather through the power of JESUS.

When Dinner succumbed to my authority, it reminded me that we too have the authority of GOD's Word to rebuke the devil and he will flee from us. When the Adversary attempts to intimidate us, we are to quote Scripture, and claim the authority given to us though the power of Christ JESUS! Meanwhile, there is NO rooster that will overpower this Crazy-Chicken-Lady-Mama again--in the name of JESUS!

P.S. I recently named one of my white hens, with black spots, "Puppy." My husband, Ted, doesn't want a dog. So now when others talk about their fur baby (dog), I can mention my Puppy. The other day one of the volunteers [at the Lord's Locker] was bragging on her new doggie and how smart it is already. As any proud owner of a puppy - I retorted, "That's so sweet, but can your dog lay blue eggs? My Puppy lays an egg for me every day!" My friend knew about my chicken named, Puppy - but there were two other gals who did not! The conversation got funnier and funnier after that - answering their doggie questions with chicken answers! LOL!

I LOVE MY CHICKENS, not so much my rooster, though!

Return to the Devotionals for Older Teens & Adults.