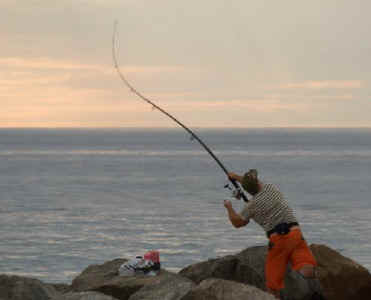 A couple of months ago I rode my bike to the beach. While resting on one of the benches to drink water, I spoke to an unhappy, wealthy man who was trying to figure out what to do with his life now that he was retired. He was a man who lacked peace. We spoke briefly about many topics. I thought he might be Jewish. As I rode home that day, I was upset with myself for not attempting to talk to him about the Lord. Since then I have been praying for another opportunity to talk to him.
________________________________________

I began the day reading the Scriptures and praying. I planned to take a bike ride to the beach before beginning my workday. I also prayed for an opportunity to tell someone about the Lord while I was out riding. Do you ever pray for opportunities to witness? Try it; you'll be surprised how God answers your prayer.

When I reached the ocean inlet, there were several men fishing. One of the younger men had a fish on the line; he was working hard to reel it in. Before I could get my camera out to record the event, he grabbed it out of the water. An older fisherman who was sitting nearby said, "He caught a Jack."

Then the younger fisherman cast his line again and within seconds, he was fighting to reel in another fish! Before the fish came out of the water, the older man said, "He's got a Snapper."

"Really? How do you know?" I asked in wonder.

"Yes," he explained, "Fish fight differently. They also hang out in different parts of the water; some near the rocks, others swim further out. Some dive down when caught, while others wiggle back and forth as they fight to get away."

I had no idea fishing had such finesse! I was amazed with their knowledge and skill. As I peddled away, I wondered, what's God's message in this? After all, we are to be "fishers of people." It occurred to me that we must take into account the differences of those to whom we witness. I wouldn't witness to an unsaved Jewish person in the same way I'd witness to an unsaved Catholic person, or to a Jehovah's Witness, or to an Atheist. I would need to be sensitive to their background and understanding. I would need to know what waters they swim in and have knowledge of the Scriptures to know what might hook them.

I thanked God for the insight and asked him to flesh out this "fish story" thought. (Within minutes, he would do so.)

I continued riding along the inlet path. Coming to the benches, where I had talked to the man for whom I'd been praying, I saw that no one was there. Nevertheless, I decided to stop to drink some water before heading home. Within seconds, the man rode up on his bike! "Okay, Lord," I whispered, "help me to speak to him," trusting that the Spirit would give me the right words to say, as is promised in Matthew 10:20.

We exchanged pleasantries. I decided to be bold and said, "The last time we talked you were unhappy." He looked confused. (Apparently, he didn't remember me.)

"Yes, you were trying to figure out what to do with yourself now that you're retired."

(The light bulb came on.) "Oh yeah," he said, with a few expletives, "That hasn't changed."

We began discussing his situation. I offered a few suggestions such as volunteering or consulting work, which were all met with reasons as to why it wasn't right for him. I then asked if he attends church anywhere. (Since I thought he might be Jewish, a better question would have been, "Do you believe in God?" Thankfully, it didn't matter in this case.)

"No, I quit that a longtime ago." He said pointedly. "I used to be an altar boy. I was raised Catholic. But when I became a teenager, I discovered girls, so I quit going."

"Why? God made girls, too." I responded, "Why would that make you quit going?" He laughed and we continued talking. I attempted several more times to turn the conversation to spiritual matters, but our discussion didn't progress further. Finally, he said he had to leave.

"I read a Psalm everyday," I said, "It gives me peace. I'd encourage you to do the same."

"It will help you too," I replied, "Because God loves you."

Before he rode off, I told him my name and asked for his.

As he rode away on his bike, I marveled at what had just happened. God had led me to his fishing hole to speak to the man for whom I had been praying and fleshed out the fish story for me!

My prayer for Joe is that he'd begin reading the Psalms and experience God's peace. I also pray that God would give me more opportunities to talk with him. Now that I have more information about Joe's background, the waters he swims in, I have a better understanding of how to witness to him and the Scriptures that might hook him. I also pray that God would bring other believers into Joe's life to speak to him of God's love and salvation.

I biked to the beach after work. Before returning home, I stopped to rest and drink water at a different location and who should ride up on his bike? This time Joe remembered me. And this time our conversation went into deeper spiritual waters. I talked to Joe about knowing God personally and suggested that he ask God to give him direction in his life. He told me he's never needed anyone to tell him what to do. He's always figured things out on his own. I asked him, "How is that working out for you now?" As the conversation progressed, he finally said that he does pray, but then he stopped abruptly and said, "This is getting too deep. I've got to get out of here." He then jumped up, got on his bike, said, "See you later," and rode away. He wasn't mad; he seemed scared. It was shocking to see him react that way. I do believe the Lord brought me to that exact spot, to another one of his fishing holes at a different time and location to speak to Joe.

I had asked God to "flesh out the fish story." And one of the things the fisherman said regarding how fish fight is that they dive down to get away. I thought it was interesting that Joe referred to our conversation as too deep, and then ran away.

Pray for Joe. He is in a spiritual fight. Ask the Lord to bring other believers into his life to tell him of God's love and salvation. Pray also that he has no peace until he surrenders to the Lord.

Prayer
"Dear Lord, thank you for allowing us to come along side of you to fish for people. Equip us to share the good news and be faithful to our calling. Help us to be bold and not shrink back from telling others about your love and salvation. Amen."

Jesus said, "Go into all the world and preach the Good News to everyone" Mark 16:15 (NLT). Learn to share your faith using the Roman Road.

Check out Living Waters Ministries; they have many effective videos to help you learn to share your faith.