"And this know, that if the goodman of the house had known what hour the thief would come, he would have watched, and not have suffered his house to be broken through" Luke 12:39 (KJV). 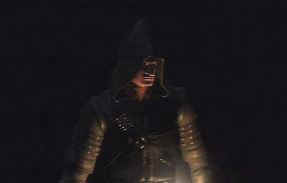 I was on my way to an appointment. I had only left the house and been driving for a matter of minutes, when I realized that I had forgotten something. I hurried back home, opened the front door and walked in. Immediately I could sense something was not quite right. I knew I was the only one home, but there was an eerie atmosphere that made me feel very uncomfortable.

Being very quiet I cautiously looked around the house. To my surprise, I noticed that the back door was not closed tight.

It was not like me to leave the door unlocked, let alone, slightly ajar. Nervously I slowly opened the door wider and peered outside. To my left, trying to hide, crouched a man I had never seen before.

He apparently had been watching my house, waiting for an opportunity to break in. When I returned unexpectedly and he heard me, he ran out the back door and didn't have a chance to close it tightly behind him.

A thief, a real live thief crouched there staring at me! I noticed that he had on a white shirt and his face was not at all pleasant to look at. Although we were both startled, when he sensed my fear, he immediately made a move to come at me and gain entrance into the house once again.

I quickly slammed the door, locked it, and then I woke up. I realized I had been dreaming.

That dream really shook me up, but God began to teach me biblical truths about it. First of all, God showed me that the thief represented the devil (John 10:10) For the thief cometh not but for to steal, kill, and destroy.

He came at such a time when I was not home, and I was reminded of (II Corinthians 2:11) where it says, Lest Satan should get an advantage of us: for we are not ignorant of his devices.

The thief had actually gained entrance, and I thought about how I am instructed in God's word to examine myself to see if I had left a door of sin open, and therefore had disobeyed the word found in (Ephesians 4:27) Neither give place to the devil.

The intruder had on a white shirt, I believe symbolic of (Matthew 7:15) a wolf in sheep's clothing. When he heard me come back home he ran! (I John 4:4) Greater is He that is in you than he that is in the world.

However when he sensed fear in me, he made a move. ( II Timothy 1:7) For God has not given us the spirit of fear; but of power, and of love, and of a sound mind. Faith overcame fear, and I was able to slam the door on the thief and lock it!

In Romans (8:37) it says, We are more than conquerors through him that loved us. Through that dream I learned many valuable lessons and I couldn't help but say, "Lord, thank you for the victory we have through Jesus Christ our Lord." Amen.

Teach children to put on God's armor of protection!