From All Nature Sings: A Devotional Guide to Animals in the Bible
by Ben Cooper 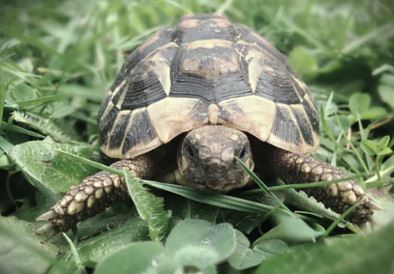 Background
The most common land turtle in the northeast United States is the box turtle. These reptiles have attracted the attention of many of young kids. They are known by their classic domed shell that is hinged at the bottom front. The carapace, or shell, gives it a rather unique defense mechanism. When startled or under attack, it draws itself into its shell and closes the hinge for protection. Scientist estimate that box turtles can live to be one hundred years old or more. It is said that you can count the number of plate layers to get their age. However, the plates can wear away over time. So numbers over twenty-five are considered best guesses. The box turtle hibernates during the cold northeast winters. They dig a hole and stay tucked away underground until the temperature of the soil warms enough for them to come out. There are two ways to tell the difference between males and females. One way is to look at the color of their eyes. Males tend to have orange or red eyes, and females have brown. The other way to tell is to look at the under-portion of their shell. If there is a predominant indentation in the middle of the shell, it is most likely a male. Box turtles are most comfortable in forests and meadows.

Their most common enemy is a highway. Even though they do have some natural predators, death by being run over is among the highest reason for loss of life. By the time they slowly make their way onto a road, they are at risk. As many as 30 percent lose their life due to traffic fatalities. We all know turtles move slowly, but there is something they cannot do. They cannot look back. Turtles expel a lot of energy and time trying to turn around. So, they learn to accept what is behind them and move forward. Turtles tend to focus on what lies before them.

Scriptural Reference
"Tortoise" is found only once in the KJV Bible, Leviticus 11:29. From the Hebrew, it would likely compare more to a land turtle or lizard rather than a sea turtle. These creatures are all considered unclean and not allowed for human consumption under the Levitical law.

Spiritual Application
There are many figures in history to admire. Some of them we wish we could be like more than others. Too many times, the figures we elevate high on a pedestal often slip up and let us down. The Bible has examples of ordinary men that allowed sin to creep into their lives and drag the name of God down. Jonah, Samson, Moses, and David come to mind. There are many more to be listed, and we might as well go ahead and put our names right down there with them. But there are a few good examples that God shows us. Still, we need to understand that as good as they seemed to be, they were sinners who needed salvation.

If there is one example that sticks out in my mind, it would be Elisha. When I read of the special way he was called by God into the ministry of being a prophet, I find it hard to see anything other than a complete and obedient servant. Reading of the events of his calling in 1 Kings 19:19-21, we are shown a man of obvious wealth. To possess twelve teams of oxen, the servants needed to drive them, and the fields large enough to utilize all of them for plowing indicates his riches.

Elijah is given guidance to seek out Elisha as his replacement. God shows him where he is as he works alongside his servants. We need to stop right here and point out that Elisha was in the field, laboring right alongside of the hired men. He was a man of humility and of a sound work ethic. I have driven a team of horses before. I admire a person who isn't afraid of hard work. God was preparing Elisha in that field for a time yet to come when he would be breaking up the fallow ground in men's hearts to receive the seed of faith that would yield fruit in due season. Elijah laid his mantle on Elisha, signifying God's calling on his life. And immediately Elisha answered the call. Like the tortoise, he didn't look back. God had been preparing him to replace Elijah as prophet. Elisha broke up his plow and harness and used them for fuel to make a fire to sacrifice his team of oxen as a symbolic statement for everyone to see that his old life was done. He was leaving his farm, his wealth, and his servants to become a servant of God. When it came time for Elijah to be taken up to heaven by God, he gave his blessing on Elisha. Elisha instead asked for a double blessing and received it. He went on to do many more miracles than Elijah had done. We are told in 2 Kings 13:20-21 that after he had died and was buried, a dead man was cast into the grave of Elisha. When the body encountered Elisha's bones, the dead man revived and stood up to his feet.

Once we make that choice to follow God, we should never look back. Choosing to fully embrace the life God has intended for us is our highest calling. Let's learn from this one thing a turtle cannot do and quit looking back. Don't let the past haunt us or halt us from moving forward. If we are blessed to live as long as a turtle, we will have surely made some bad choices along the way. We have a race to finish. We have a prize to obtain. Each forward step brings us closer to Him who has called us.

Copyright 2019 Ben Cooper
This devotional was used by permission and is from the book, All Nature Sings: A Devotional Guide to Animals in the Bible

Return to the Adult and Teen Devotionals page