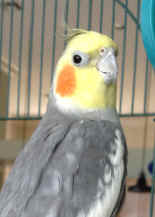 ". . . should we keep on sinning so that God can show us more and more of his wonderful grace? Of course not! Since we have died to sin, how can we continue to live in it? Or have you forgotten that when we were joined with Christ Jesus in baptism, we joined him in his death? For we died and were buried with Christ by baptism. And just as Christ was raised from the dead by the glorious power of the Father, now we also may live new lives" (Romans 6:1-4 NLT).

Last July I was out of town, but talking to my grown son, Eric, on the phone. He was staying at our home that looks out on the Intracoastal Waterway in Florida. As we talked, he noticed something unusual in the water. It looks like a bird, mom, he said. I pictured a duck or other water bird. No, its more like a pigeon. Its trying to swim with its wings, but its not doing so well. So telling me hed call back in a few minutes, Eric hung up to jump in and pull the bird out. When he called back, he described the bird--with a yellow head and a jaunty crest, he was clearly not a pigeon.

Whatever he was, he was grateful enough to be out of the water that he let Eric hold him and care for him. Going next door to talk to the neighbors who own a bird, Eric got help caring for him and learned that, like the neighbors bird, it was a male cockatiel. Eric named him Reggie and bought him a cage. He and Reggie spent a lot of time together. Then, about six weeks after his rescue, he learned that Reggie had gotten lost from a house down the street. Eric sent him back to the family, but Reggie was not happy about it. He fussed and squawked until they finally had to bring him back to be with Eric.

For Reggie, the experience of being in the water was traumatic. He knew that the water would be his death, so he transferred his allegiance (from those who owned him) to the one who rescued him.

For those of us who are baptized, the water of baptism is a symbol of death. The life we lived without God is a life of sin that leads to eternal death. And like Reggie, we have transferred our allegiance (from the one who owned us) to the one who cared enough to jump in and rescue us. And we too do not care to go back to that life; we desire to live in companionship with our rescuer, Jesus.

The next time you witness a baptism, or someone asks you what the water is all about, remember Reggie, the baptized bird!