Do You Believe in the Resurrection?

Questions I Would Ask | by Sarah Keith

Listen to the audio version. 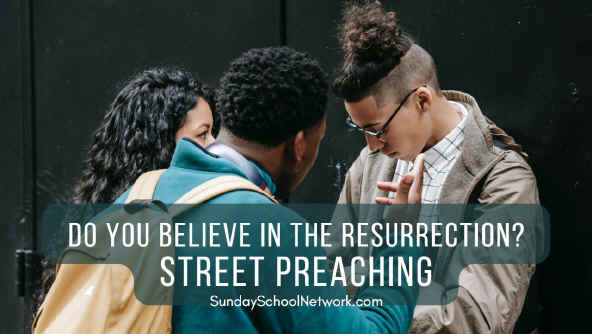 The street evangelist called out to a group of college kids, "Do you believe in the resurrection of Jesus?"

"No!" a young women shouted back, "If God is real, then why doesnt he do something about starving kids, put an end to disease, and bring peace to the world?"

"Thats right!" another student shouted back, "How can we believe in the resurrection? Thats impossible. No one comes back from the dead; its never happened before."

I continued watching the exchange as the man made his points. The conversation proceed respectfully from both sides.

If I had the opportunity, I would liked to have asked and then discussed the following three questions with the students. I hope these questions and answers will help you when sharing your faith with others.

First, I would have commended their understanding of God, saying, "If I understand you correctly, you believe that if God exists, he would have supernatural powers to feed starving kids, cure diseases, and establish world peace. Is that right? If that's the case, then is it difficult to believe that this God would also have supernatural power over life and death and could rise from the dead if he chose to do so?"

"Secondly, I'd like to acknowledge that you value kids not starving, the importance of curing diseases, and establishing world peace. But why? Why are these things good? Says who?"

(I believe God has given us consciences* to know right from wrong. As a result we understand these basic principles of good and bad. People are made in God's image. He has given us his Word, his laws, and a sense of justice to know what is right and how we should live. I think that is why you value feeding starving kids, curing diseases, and establishing world peace. You are God's image bearer. God has given you a conscience to understand this. Without God and his standards it is impossible to justify why sin is sin, and why wrong is wrong. It's never ok to murder, or steal, commit adultery, lie or be unloving. If these behaviors are just a matter of opinion, then the idea of wrong is just thatan opinion.)

"Finally, do you know what God did do to bring an end to starving kids, cure diseases, and establish world peace?"

(The world is a broken place; people do cruel things to one another. Even so, God loves his creation and the people in it. God became a human being to pay for the sins of sinful people, to right the injustices we endure, as well as the blame we bear in doing wrong against God and others. We are all guilty before God. The Bible says, "For God so loved the world that he gave his one and only Son, that whoever believes in him will not perish but have everlasting life. For God did not send his Son into the world to condemn the world, but to save the world through him" John 3:16-17.

When we trust that Jesus died for our sins, taking the punishment we deserve, and rose from the dead to bring us into his family, he gives us jobs to do! The Bible says, "We are Gods handiwork, created in Christ Jesus to do good works, which God prepared in advance for us to do" Ephesians 2:10. In other words, while we live on this broken planet, Gods children become his hands and feet to do his will, which might include, feeding starving kids, helping those suffering from diseases, and doing what we can in our sphere of influence to live peacefully and to love one another.

God has worked in the past, and continues working to restore his creation. However, there is coming a day when this world will end, where God will once and for all make everything right and good. In that day God's children will live in his loving presence for eternity. But for those who reject Jesus, they will be separated from him. That is a terrifying thought.  The Bible says, "I tell you, now is the time of God's favor, now is the day of salvation" 2 Corinthians 6:2. Come to Jesus! Your eternity depends on it!)

Read the Top Ten Reasons to Believe in the Resurrection.