Interesting Facts About the USA and Washington D.C. 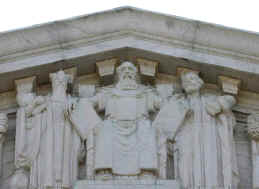 DID YOU KNOW?
As you walk up the steps to the building that houses the U.S. Supreme Court you can see near the top of the building a row of the world's law givers and each one is facing one person in the middle in full frontal view--it is Moses and he is holding the Ten Commandments!

DID YOU KNOW?
As you enter the Supreme Court, on the lower portion of the two, huge oak doors, the Ten Commandments are engraved on each.

DID YOU KNOW?
As you sit inside the courtroom, you can see the wall, directly above where the Supreme Court Judges sit, a display of the Ten Commandments.

DID YOU KNOW?
There are Bible verses etched in stone all over the Federal Buildings and Monuments in Washington , D.C.

DID YOU KNOW?
Every session of Congress begins with a prayer by a paid preacher, whose salary has been paid by the taxpayer since 1777.

DID YOU KNOW?
Fifty-two of the 55 founders of the Constitution were members of the established orthodox churches in the colonies.

DID YOU KNOW?
Thomas Jefferson worried that the Courts would overstep their authority and instead of interpreting the law, they would begin making our laws an oligarchy--the rule of the few, over the many.

Pray for the USA!

Download and Make the Patriotic Catcher
Kids learn the answers to eight, basic USA citizenship questions such as:
"Why did the Pilgrims come to America?
What is the US Constitution?
And what does the First Amendment guarantee?"

Return to the Children's Sermons page.