Learn about the Feasts of Israel

Today, Pentecost Sunday is celebrated by Christians fifty days after the resurrection of Jesus, our Passover Lamb, the firstfruits of those who have died in Christ (1Corinthians 15:20). It is the day we remember when Christians were first given power from God's Spirit to do his work on earth.

Activity before the lesson
Have the children work in teams using the letters in PENTECOST as an acronym to describe powerful things. Possible responses, but don't let your class in on these until they've attempted to fill in the answers for themselves: Powerful, Energy, Nuclear, Turbo, Explosion, Christ-follower, Omniscient-God, Sonic, Thunder.

Read or summarize Luke 24:1-53 (I teach 5/6th graders; we take turns reading the Scripture. It is believed by many Bible scholars that Luke wrote the book of Acts as a "Part 2" to the Gospel of Luke. Have the children imagine and discuss what the disciples felt like after his death. Imagine what you would feel like if someone you loved had been brutally killed.)

Jesus' followers hopes of being delivered from Roman rule was gone. Their hopes and dreams were dashed, and their leader was dead! But then Jesus appeared to them after the resurrection, explained the Scriptures, restored their hope, and gave them instruction to stay in Jerusalem so they would receive God's promise and power. The word power in the New Testament is the Greek word, dunamis, from which we get our English word, dynamite. This same dynamite power that was used to raise Jesus from the dead, was soon to be available to all believers! Luke tells us that Christ's followers returned to Jerusalem and were meeting regularly at the temple.

On the Day of Pentecost, the believers were together, probably at the temple, and God's Spirit descended on them with tongues of fire* and they were filled with the Holy Spirit. They were given the dynamite power to do God's work, and as a result, a joyous and mighty miracle occurred; the people from gathering nations who were in Jerusalem to celebrate the Feast of Weeks, also known as Pentecost, could understand each other in their own language! This mighty miracle allowed the Good News of Jesus to spread quickly to all the surrounding nations of the people who had gathered there! Peter spoke to the crowd and told them this miracle was to accomplish what had been planned from ages passed. He also told them that "Everyone who calls on the name of the LORD will be saved!"

The joyous news is that God's Spirit and dynamite power is still available to all who believe! Everyone who calls on the name of Jesus will be saved.

Click here to get the Pentecost Rusher Toy activity to coordinate with this lesson. 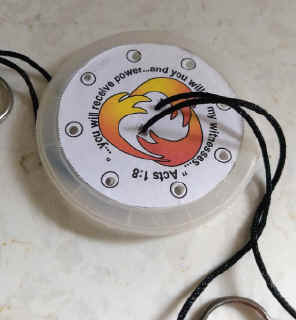 
You can make a difference!
Your purchases and donation to the site help to distribute our children's ministry resources to churches across the world.