Get access to FREE Kids Sunday School Ideas when you subscribe. Make sure to check your inbox or spam folder for our confirmation email and then add us to your address book to insure delivery - Learn More


Our Bible lesson plans are teacher-friendly; they do not require extensive preparation and are versatile for multiple-aged Christian classes. Use our curriculum in Sunday school, kids' church, midweek programming, and Bible clubs too!

And, don't miss our printable Bible Posters to liven your classroom setting and to coordinate with your lesson plans.

Crafts and Games for the Lenten Season - Kids Make Their Own Set!

The egg pictures tell the Easter resurrection story. Children can color and cut their own set of twelve eggs. The egg patterns can hold real hard-boiled eggs or candy-filled plastic eggs by using the special pattern stand, or cut the egg shapes away from the stand and place the egg pictures inside 12 plastic eggs or in one large egg. There are multiple uses for this craft, as well as a game for kids to play! Click the following link to see more pictures, download a sample, and to learn more! Tell the Resurrection story by using our Egg Patterns. 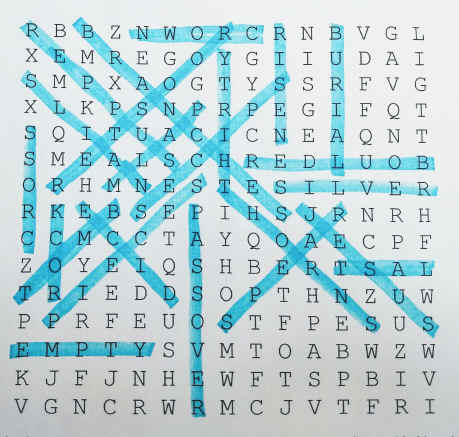 This is the solution.

Find and circle or highlight the Easter story words, below, in our word search puzzle. The words are listed frontwards, backwards, vertically, horizontally, and diagonally.

Adapted from Genesis Chapters 6 and 7

(Read the following story. When children hear Noah’s name, have them make a fist with one hand and “hammer” it three times into the palm of their other hand.)

After Adam and Eve disobeyed God, he sent them out of the Garden. The Bible tells us
that Adam and Eve began having children, and their children had children, and their
children had children, and so on, and so on until many, many people were living on the
earth. Life outside the Garden was difficult. The people on earth had become very
wicked; their thoughts were evil all the time. God wasn’t happy with them. In fact, it
broke his heart that he had created them. So the LORD said, "I will wipe all living
creatures from the face of the earth--for I am sorry that I have made them.”

But there was one man named Noah who God loved. Noah was a righteous man; Noah
walked with God, which means he obeyed God. Noah had three sons: Shem, Ham, and
Japheth. God said to Noah, “The people on earth are living very sinful lives. I am going
to put an end to them. They have filled the earth with their wickedness. You can be
sure, Noah, that I am going to destroy both them and the earth.”

God told Noah to build a very big boat, an ark. It would be big enough to hold Noah’s
family and two of every kind of animal! He also told Noah to take extra animals that they
would use for sacrifices. (Remember, sin must be punished, sacrifices must be made.)
The Bible tells us that Noah did everything just as God commanded him. Noah was
obedient to God. But the other people on earth continued to live without faith in God or
obedience to him (see Matthew 24:37-39).

Finally, when the ark was built . . . (the rest of this enrichment idea is included when you purchase Super Heroes of the Bible.)

Discussion Questions
1) It took courage for Noah and his family to trust God. Do you think they still might have
been afraid?
2) There were no rivers or oceans where Noah lived. Do you think the people there
might have thought Noah was crazy to build an ark where it couldn’t even float?
3) Do you think Noah wondered why God would have him build a boat?
4) Noah trusted God. If God said it, then he obeyed it. What can we learn from Noah’s
obedience?
5) How did Noah’s obedience change the course of human history?

This past Christmas I purchased a small, metal snowman ornament for my one-year-old grandniece, Adelyne. The ornament was suspended from a spring, so when you held the loop above the spring, the ornament bounced into the air. Her parents later sent me a video of her opening the package. It was adorable seeing my nephew gently instruct his daughter to hold the loop so the ornament would freely bounce up and down. She on the other hand wanted to hold only the ornament. My nephew was patient, though; each time his daughter grabbed at the ornament he tenderly removed her hands so she would experience the funny, bouncing snowman. Finally, when she realized what her father was teaching her, she let go of the ornament and allowed it to spring-away, which gave way to a wide, sweet grin on her beautiful face!

This scenario reminds me of how we often tend to grab hold of situations, plans, or relationships we think will make us happy—our idols as it were—of which God would have us let go.

Jesus said, when I am lifted up I will draw all people . . . He said this to show the kind of death he was going to die (John 12:33). The Greek word for lifted is hupsoo, which means to exalt. To exalt is to elevate by praise, to glorify, or to raise high. Jesus was raised high on a cross to die a painful, bloody death. He was then raised to life so untold millions could be drawn into God's kingdom. God did this to raise up a holy people to glorify him by telling others the message of Easter: He is risen, salvation is found in no other name!

Where will you spend eternity? Are you going to heaven?